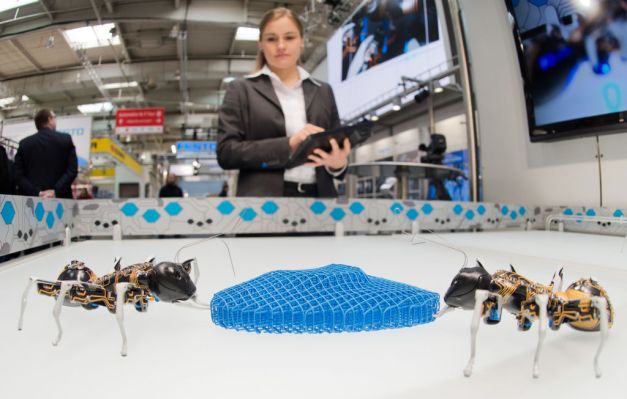 While we’re preparing to launch a six-wheeled robotic rover roughly the size of a car to explore Mars, future planetary exploration and science missions could employ much smaller hardware – including, potentially swarms of robots the size of insects designed to act in concert with one another autonomously.

Swarming insect-like robots are being developed by a number of different institutions and companies, but a researcher at California State University Northridge recently received a sizeable Department of Defense grant specially to fund the development of autonomous robot swarms for extraterrestrial applications – as well as for use right here on Earth in mining, industrial and search and rescue efforts.

The grant, for $539,000, was awarded to CSUN mechanical engineering professor Nhut Ho, who also directs the NASA Autonomous Research Center for STEAMH (which focuses on collaborative research efforts between Science, Technology, Entrepreneurship, Arts, Humanities and Mathematics academics, hence the acronym). The goal of the research is to build robotic swarms that can essentially be dropped into unknown and hostile environments, and then figure out how to complete specific tasks they’re given without essentially any additional input.

Ultimately, such a swarm would be able to perform complex problem solving to deal with challenges, including organizing themselves into different sized groups to handle different aspects of the task at hand, as well as dealing with setbacks including losing individual members of the swarm through redundancy and repurposing.

One way the system will be tested is through use with a collaborating team from NASA Jet Propulsion Laboratory (JPL) that seeks to find the best solutions for autonomously navigating and mapping underground environments.

As for why this approach is even being considered, there are a lot of potential benefits of using a swarm of small rovers vs. a single, large one. At a very basic level, there’s built-in redundancy – if a rover like NASA’s Perseverance encounters a fatal error, the mission is essentially done, while a swarm losing individual members shouldn’t end the entire mission. Also, a swarm can self-assemble into individual subunits and cover more ground more quickly, accomplishing a number of goals in parallel where a larger rover might have to handle tasks in sequence.

CSUN is working with partners including JPL, as mentioned, as well as Boston Dynamics, Intel, Clearpath Robotics, Telerob, Veoldyne and Silvus Technologies on its swarm project. It could be a while before any insect bots actually set ‘foot’ on the red planet, but this is definitely a strong sign of interest and support from large, deep-pocketed public funding sources.

Source: https://techcrunch.com/2020/06/08/swarms-of-autonomous-insect-robots-could-prove-key-to-future-planetary-exploration/?utm_source=feedburner&utm_medium=feed&utm_campaign=Feed%3A+Techcrunch+%28TechCrunch%29
Proactive Computing found this story and shared it with you.
The Article Was Written/Published By: Darrell Etherington