A lackluster microphone can be frustrating to say the least—both for the person using it and the people who have the displeasure of listening to it. You might want to upgrade to a dedicated microphone for clearer audio, but that doesn’t mean you have to deal with a complicated bulky setup. Here are the best small USB mics you can buy today.

USB microphones are ready to use out of the box, sound great, and can come in surprisingly small packages. Whether you just want to step up your game for your next video call or you finally want to start that podcast you’ve been planning, there are plenty of mics that deliver on quality sound while keeping a compact form factor.

What to Look for in a Microphone

Most of the microphones on this list are condenser mics. This is the most common type of USB microphone, and there’s a lot to consider when choosing out which one to buy. The original Blue Yeti is one of, if not the most popular USB microphones around. It’s the microphone of choice for many YouTubers, podcasters, and streamers, and pretty recently Blue compacted that great tech into the adorable Nano. It’s even still capable of the 48 kHz high-definition sound that the original Yeti accomplished, with a higher bit depth of 24-bit compared to the original Yeti’s 16-bit.

Considering the size difference between the Nano and the original Yeti (the Yeti Nano is about three inches shorter than the original), it’s remarkable how great the Nano sounds. Like the Yeti, you can install Blue’s Sherpa software to adjust the gain and sampling rate to your liking. The Nano can also switch between cardioid and omnidirectional polar patterns with the button on the back of the mic or by using Sherpa. Also on the back of the microphone, you’ll find a zero-latency headphone jack for monitoring—there’s also a headphone-output volume dial on the front. 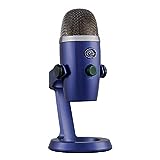 A compacted version of one of the best USB mics around. Just because you’re on a tight budget doesn’t mean you can’t get great audio. The FIFINE K669B delivers on some great audio quality for the price and is more than enough than for voice or video calls. Most reviewers cite this microphone as being pretty sensitive though, so if you want to use it for recordings, you’ll likely have to edit out some background noise.

There’s no software for the K669B, but the stock settings should be fine for most situations (16-bit, 48 kHz with the cardioid polar pattern). There is a dial on the front of the mic to adjust the gain, which is always useful to have.

The K669B comes in Black and Rose Red.

A cheap mic with premium sound. The Wave 1 and Wave 3 microphones are mics from Elgato that are tailored for streaming. They are extremely similar to each other—in fact, specs-wise, they are effectively identical. The only difference of note is that the Wave 3 offers an impressively high sampling rate of 96 kHz, while the Wave 1 goes with the more standard 48 kHz (they both have a bit depth of 24-bit). Both record using the cardioid polar pattern and have zero-latency headphone jacks for monitoring.

Looking at the outside, the microphones look extremely similar, but the Wave 3 is slightly taller than the Wave 1 (0.4 inches taller to be exact). The main physical difference between the Wave 1 and Wave 3 are the dials on the front of the microphones. The dial on the Wave 1 only adjusts the headphone-output volume and can mute the mic if you push it in. The Wave 3’s dial can switch between multiple modes (gain adjustment, headphone-output volume, and mixing the PC and microphone audio) by pushing the dial. There’s also a dedicated mute button on the top of the Wave 3.

Another big draw to either of these mics is Elgato Wave Link. This is Elgato’s audio-mixing software specifically created with streamers and the Wave microphones in mind (although it also works with non-Elgato microphones). You can use it to balance the audio of up to nine sources, whether that’s the Wave 1 or Wave 3, your game volume, or other programs like Discord. There’s also the “Clipguard” setting in Wave Link, which automatically balances your audio to avoid peaking. Because of all this and its simple design, Wave Link is extremely useful to streamers looking to improve their overall audio setup. Wave Link is also where you can tweak the settings on the Wave 1 and 3, such as the gain and sampling rate.

The Wave 3 costs a bit more than the Wave 1, with the main advantage being the fancier dial. But at the end of the day, these microphones are going to sound extremely similar to each other, and because Wave Link was designed with both in mind, streamers can’t go wrong with either. 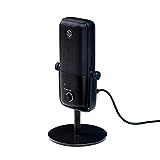 A great mic with great software. This is the perfect starting mic for aspiring streamers. While Razer is mostly known for its gaming peripherals, it does branch out into other fields regularly. The Seiren X is Razer’s attempt to break into the world of microphones, and it’s a pretty successful attempt at that. It’s marketed as a “gaming microphone” (whatever that means), but it’s still a great-sounding and compact (7.24 inches tall with stand) mic that can be used by anyone.

There’s nothing too special about the Seiren X itself. It has a zero-latency headphone jack on the bottom of the mic, with a dial on the front for adjusting the headphone-output volume—there’s also a mute button directly under that dial. It records in the super-cardioid polar pattern with a sampling rate of 48 kHz, 16-bit.

Overall, it’s just a solid microphone with a sleek chassis. While it doesn’t boast any unique features, there’s nothing to turn you away either. You can use Razer’s Synapse 3 software to fine-tune the microphone’s settings to your liking. 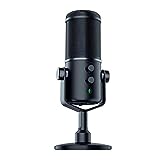 A solid mic for its price and size. The Seiren Emote is the same microphone as the Seiren X, except that it uses the somewhat rare hyper-cardioid polar pattern (similar to super-cardioid, except it has an even narrower area where it’ll pick up sound). However, that’s just talking specs, more notably, the Emote has a pixelated LED display on the back of the microphone. This display can show-off little animations and pictures, either built-in by default or ones you make in Razer’s streamer companion app. (You still use Synapse 3 to adjust the audio settings.)

This software also allows you to integrate the mic with your stream, so you can have certain emoticons show up on the mic depending on what your chat says, for example. Of course, that doesn’t improve the microphone functionally speaking, which can make the significant price  increase from the Seiren X hard to swallow. But if you want a unique microphone that can be fun to mess around with or you’re a streamer who wants to trick out their set up, the Emote may be for you.

A solid microphone with some added flair. The final microphone in the Seiren line is the Seiren Elite, which unlike the rest of the mics on this list, is a dynamic microphone instead of a condenser microphone. Dynamic mics, generally speaking, are better at capturing loud sounds and rejecting background noise than condenser mics, so they’re more suited for professional recordings. Aside from that, the Elite is extremely similar to the Seiren X, though it uses the cardioid polar pattern instead of super-cardioid. The Elite is also taller at 8.84 inches and includes a gain dial on the front of the microphone, along with a headphone-output dial for the zero-latency headphone jack.

And, like the Seiren X and Emote, you can use Razer Synapse 3 to adjust any settings.

A dynamic microphone aimed at those with more professional needs. If you want the smallest microphone possible, then the Samson Go Mic is for you. While it’s been around for about a decade now, it still sounds fantastic for the size. It can record in both cardioid and omnidirectional patterns (using a switch on the side of the mic), and records at the standard CD-quality sampling rate (16-bit, 44.1 kHz). It also features a headphone jack for zero-latency monitoring. (Unfortunately, there’s no way to adjust the headphone-output volume though.)

It’s only six inches tall and comes with a travel case perfect for storing the microphone when not in use. The included stand can sit on your desk or rest on your laptop or monitor (much like a webcam). Overall, the Go Mic is extremely versatile, and it’s great to see that in such a small microphone.

There is no software available for the Samson Go Mic, unfortunately, but the stock settings will be fine for the majority of situations.

The smallest mic out the list, and it still sounds pretty great. The ModMic is a bit different from the rest of the microphones here. It’s a small microphone that can be attached to any pair of headphones via the included magnetic clasp (note: only over-ear headphones, not earbuds). The clasp is attached with an adhesive strip, but don’t worry, it won’t leave any residue behind if you decide to take it off. There are also three additional strips included in the box if you want to switch the headphones you’re using. (You can also buy more of these strips if you need to.)

Because of the size and build, the ModMic is more comparable to headset mics than desk mics. It may not sound as good as the mics we’ve already covered, but the ModMic still sounds great for a headset and is more than enough for voice calls.

There are two versions of the ModMic: wired and wireless, the latter of which uses its own USB-A adapter. 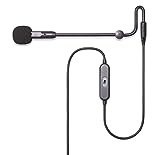 A small attachable microphone that turns any pair of headphones into a headset.

A wireless version of the ModMic

Source: https://www.reviewgeek.com/47538/6-excellent-usb-microphones-small-enough-to-toss-in-your-laptop-bag/
Proactive Computing found this story and shared it with you.
The Article Was Written/Published By: Eric Schoon