4 Reasons Everyone Should Own a Portable Battery Portable batteries are one of my favorite accessories, but they’re also admittedly pretty unsexy. They’re not as glamorous as a new mouse or set of true wireless earbuds, but that doesn’t mean a solid portable battery is any less of a must-have for literally everyone. So, if you don’t have one, you probably should. Here’s why.

Use It to Charge Smaller Gadgets I use a wireless keyboard and mouse at my desk, and I absolutely hate plugging them into a wall wart (or even a USB port on my computer). Something about that cable across my desk drives me nuts, not to mention how annoying it makes using the mouse. So instead, I’ve been using a portable battery for both of these.

It may seem trivial, but it makes a pretty big difference. It’s easier than dragging a cable across my desk and more convenient than plugging into the computer. The portable battery sits flush next to the keyboard while it’s charging, and the neatly wrapped cable keeps things tidy. The mouse is also easier to use attached to the battery because the cable is able to move about freely.

I also use a portable battery to charge other small gadgets like wireless earbuds, flashlights, and whatnot. I can get multiple charges for a variety of small devices from the battery. And, as long as I don’t forget to charge the battery (which I usually do overnight), it’s always ready to go.

A PD Battery Is a Great Couch Companion If I get it a little blanket, it may never leave this spot. Cam

I’ve been working from home for a long time, and some days I get sick of looking at my home office. And on those days, I will camp my ass on the couch for as long as I can (until my wife gives me the boot so she can watch TV or whatever). But sometimes my laptop isn’t up to the challenge, and I hate digging around behind the couch for an outlet.

But the RAVPower battery I’ve been using has a 65-watt PD (Power Delivery) port, which means it can power most laptops. It works beautifully to juice up my Pixelbook and Surface Laptop 3, and saves me a bunch of hassle when I last longer than my laptop (often). One full charge of either laptop will basically drain the battery, though, which is a potential downside. Something to consider if you’re looking for a couch buddy—get one bigger than you think you’ll need.

It’s a Must-Have in an Emergency You can boost your car with this battery. Cam

A storm is rolling in, and there’s a chance your power could go out. Your phone is at 12 percent. What do you do? If you have a portable battery, you don’t sweat it. You’ll be able to make sure your phone is juiced up at least a couple of times, which might be crucial in the case of a real emergency (not just a power outage), like a natural disaster.

There are also portable batteries that are designed to be able to boost a dead car battery. They’re slightly larger than other portable batteries, but having one in your car for emergencies could be the difference between having to call someone and getting your car boosted immediately. Most of those batteries also have other features like a built-in flashlight. In many cases, they’re also capable of charging your phone or laptop if you need them to. Just remember to get it out of your car and charge it once every six months or so!

Charge Your Battery-Hungry Gadgets Right in Your Bag It’s in ur bag, chargin’ ur laptop Cam

After CES 2020 (which feels like a lifetime ago), I wrote about how a 45-watt RAVPower battery saved my ass on more than one occasion. A big part of that was because I could charge my laptop or phone while they were in my backpack between meetings. That made the “downtime” while traveling between places incredibly valuable when it came time to get stuff done during or after those meetings. Plus, at events like CES, any outlet you might potentially find will almost certainly be occupied by someone else.

Of course, not everyone is going to CES, but you should still be the appeal for other real-life events too. Like on vacation, when you might be using your phone for navigation to find your way around.

Okay, Which Portable Battery Should I Buy?

So you’re convinced, but a quick look through Amazon has you absolutely overwhelmed with the number of options. I don’t blame you! Portable batteries are prolific—everything from small and ultraportable $5 “tubes” to massive beastly bricks that could bludgeon someone make it a hard choice.

Never fear, friend, because the RG staff has used more portable batteries than you can shake a stick at (why are you shaking sticks at batteries?), so we have some favorites. But first, a quick word about those cheap-ass “tubes.”

I can see why those are so popular—they’re cheap and ultra-portable. I’m sure they’re great in a pinch, but if you want a battery with some real utility, I’d suggest skipping those. They’re more than likely only big enough to charge your phone one time (and certainly not powerful enough for anything else), so they’re honestly not all that useful. Unless, of course, you only buy one to supplement your real battery. I dunno man, I guess that’s a thing someone does.

Secondly, you might be tempted to pay a little extra for a battery that has wireless charging. In a word: don’t. I’ve used several batteries with wireless charging and in every situation, it’s been a superfluous feature that does nothing more than jack the price up. It’s simply not worth it.

And with all that, here’s a look at the batteries you probably should buy (or at least consider). If you’re looking for a killer use-it-at-your-desk-or-throw-it-in-your-bag battery that can charge everything from your headphones to your laptop, this is it. It’s small enough to be truly portable, but powerful enough to juice up damn-near anything you throw at it.

It has two USB ports—a 60w USB-C port with Power Delivery and standard 18w USB-A port—so it’s versatile enough to cover most bases. It also has a 30w input, so it charges quickly and will be ready the next time you need it.

This RAVPower battery is big and fast enough to juice up a laptop, but still compact enough to throw in your bag.

The Best for Emergencies: Anker Roav As I said earlier, some portable batteries can boost your car if you get caught with a dead battery—the Anker Roav is one such battery. This 12,800 mAh battery doesn’t have the biggest capacity, but it’s also not meant to be a battery you toss in your laptop bag for everyday use. Nay, this is a beefy emergency battery that’s best left in your car so it’s there in case of, well, emergency.

Aside from the ability to boost your car’s battery, it also has a built-in flashlight, 45-watt charging, two USB-A ports, and a USB-C port. It’s a big boi.

This chonky boi can charge your laptop or phone, has a built in flashlight, and can even boost your car in a pinch. What more could you want? If you’re looking for something that is powerful enough to juice up even the beefiest of laptops, look no further than the massive 27,000 mAh SuperTank from Zendure. It has not one, but two USB-C ports capable of outputting at 60w and 100w, respectively. That’s enough to power a 15-inch MacBook Pro.

But it doesn’t stop with a pair of USB-C ports, because it’s also packing a pair of 15w USB-A ports. And despite its fatboy 27k mAh size, it can hit a full charge in just two hours with a 100w brick. As an added bonus, it’s made of aluminum and weighs over a pound, so it can also double as a weapon in a pinch. Consider that a perk. 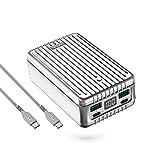 With its 100w output, this battery can handle even the most power-hungry laptops. Plus it would likely knock someone out if you throw it at them.

Source: https://www.reviewgeek.com/49104/why-everyone-should-own-a-portable-battery/
Proactive Computing found this story and shared it with you.
The Article Was Written/Published By: Cameron Summerson