The 2020 iPad Air comes at an interesting time in Apple’s release cycle. The iPad Pro is still strong from a specs perspective but is now technically a half generation or so behind in CPU. The new pro models won’t arrive for (theoretical) months.

So what you end up with is a device that shares the design philosophy of the iPad Pro and inherits some of its best features while simultaneously leaping ahead of it in raw compute power. This makes the Air one of the better overall values in any computing device from Apple in some time. In fact, it’s become obvious that this is my top choice to recommend as a casual, portable computer from Apple’s entire lineup including the MacBooks.

The clean new design has a thin, pleasantly colored simplicity to it. It matches the new iPhone 12 aesthetic quite well. The smoothly bullnosed corners and dusty blue peened finish make this one of the better looking iPads since the original. For years, Apple moved to try to “pull” the casing of the iPads around the back, making it disappear. This new design is a nice balance between the original’s frank simplicity and the new iPad Pro direction. A bit less sharp-edged and a bit more ‘friendly’ while still crisp. 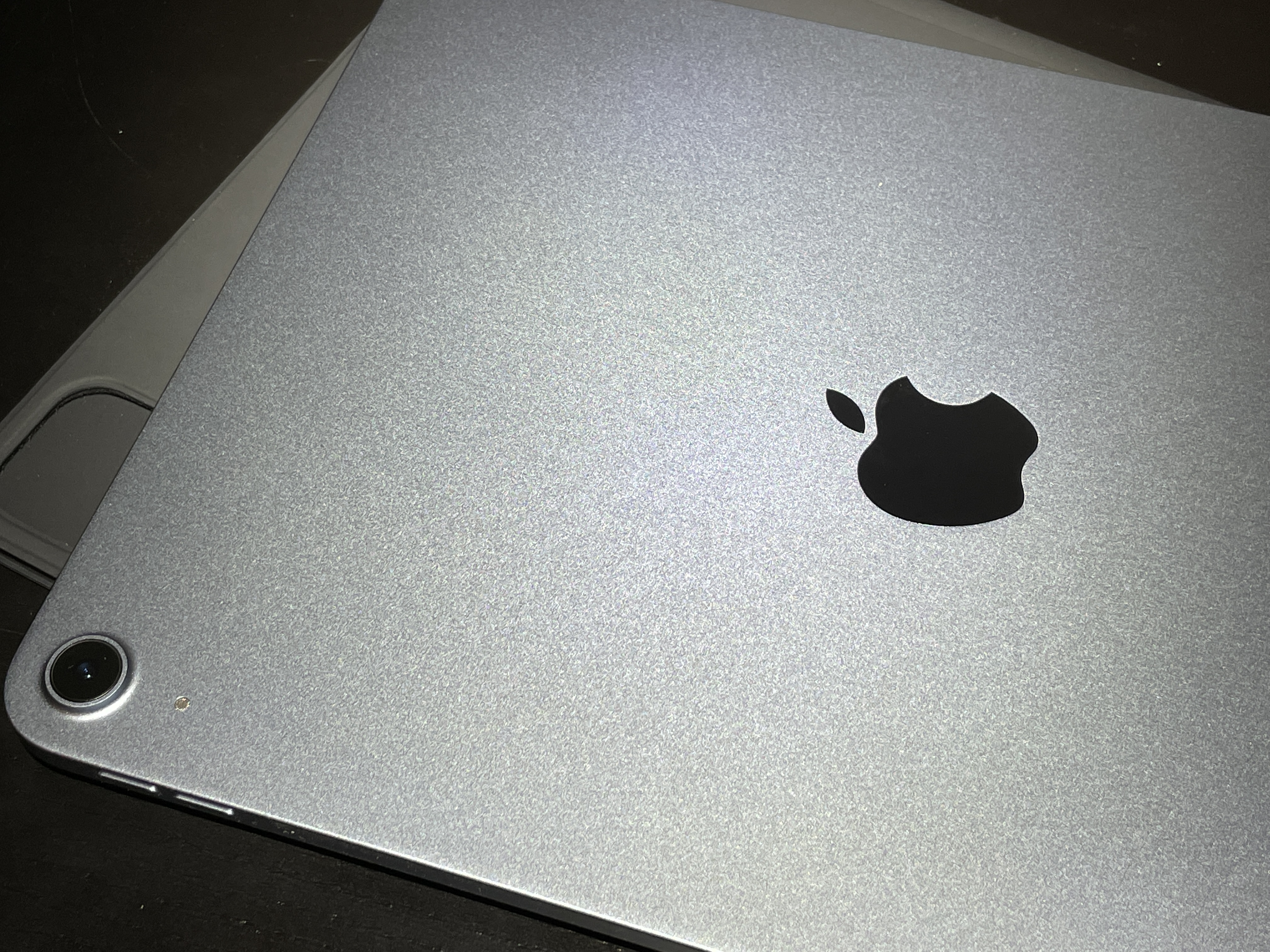 One thing that I love a lot about the Air is that it lives up to its name and clocks in at the lightest weight of any of Apple’s portables at 1.0lb flat. This plus the Magic Keyboard is just such a killer portable writing machine it’s wild.

Apple didn’t fix the camera position on this, something that still stinks about the iPad Pro because you have to use Face ID to unlock it and your hand is always in the way in landscape mode. Instead, they straight up ditched the entire True Depth camera and Face ID altogether and tucked Touch ID into the power button.

The initial scanning process to set up a finger seemed ever so slightly more reluctant to grab my fingerprint here than it used to on the home button. My guess is that it’s to do with the oblong shape of the sensor or its housing. But once it was scanned and input, I’m happy to report that it works exactly as well if not better than any iPhone home button version. I set a finger on my left hand here because I only use iPads in horizontal mode. But if you aren’t a keyboard person and are doing a lot of reading, the right hand would be appropriate.

I actually found this to be a more natural feeling activation gesture than swiping up only to remember that my hand is in the way and having to move it and look at the camera. If the camera was placed along the horizontal edge of the iPad Pro or even in the corner I might feel differently. But as a compromise so that Apple doesn’t have to ship a True Depth camera in this unit, it works plenty fine. 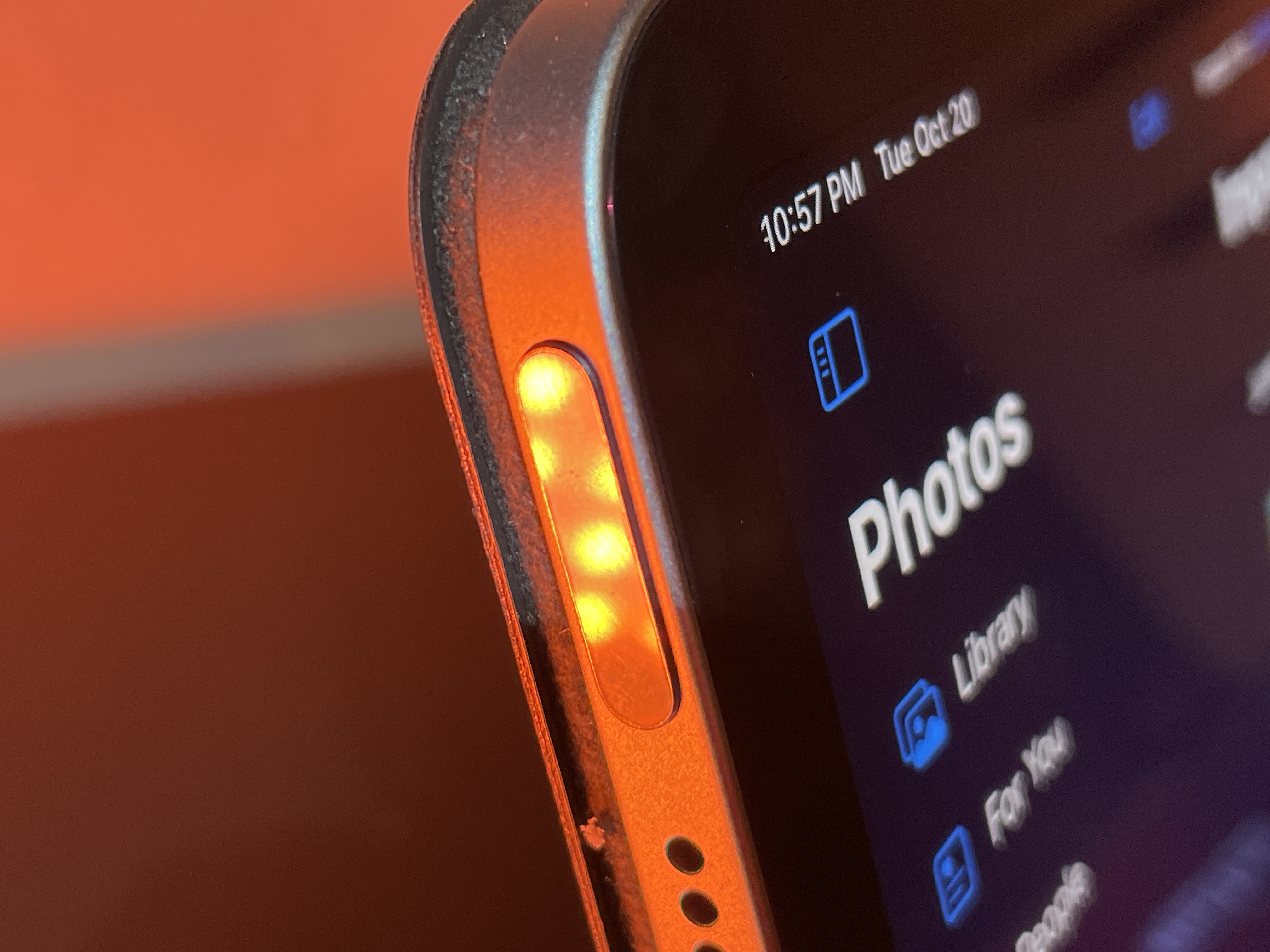 The surface of the Touch ID button is covered by an opaque sapphire crystal cover that blends well with the casing but allows the print to be read through it.

Once you have the iPad Air unlocked, it falls right into the ‘X’ style navigation system. Swipes to open and navigate and move around. This is great because it brings near parity of navigation across Apple’s device lineup (minus the iPhone SE.)

The camera is fine. Do you shoot pictures on an iPad? Really you do? Wow, interesting, ok. Maybe buy the iPad Pro which has a full LiDAR array, a Wide and an Ultra Wide lens. Great for artists, scanning, reference work etc. On the iPad Air the camera is just fine but is really a formality. It can be used in all of those ways and the quality is on par, but it’s there because it has to be there.

Those of you that travel with an iPad and an iPhone will be happy to know that you can charge an iPhone from the USB-C port on the iPad Air. And yep, it works fine with USB-C hubs and card readers too. 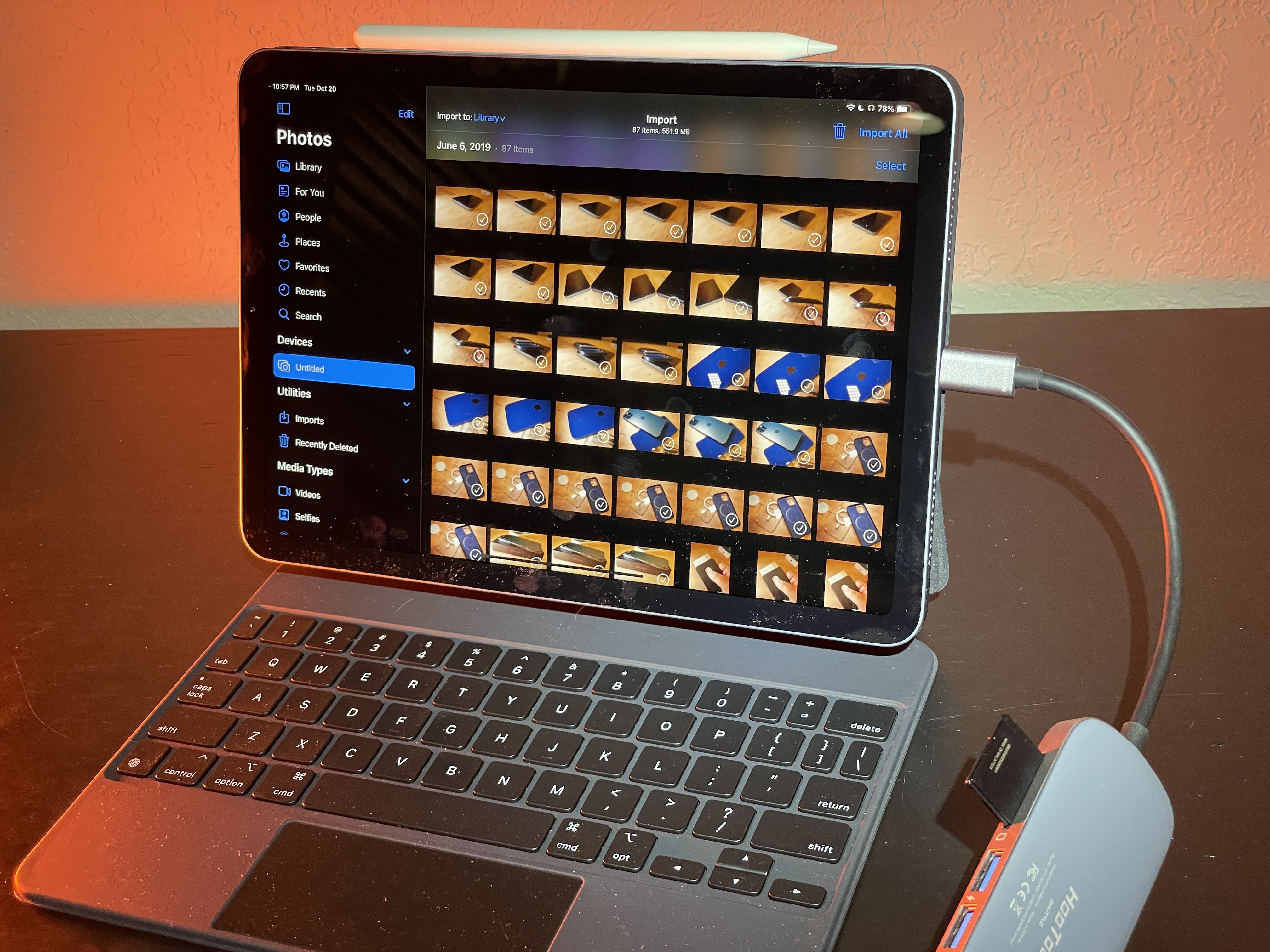 The iPad Air has 4GB of RAM where the iPad Pro 2020 has 6GB. It has a Liquid Retina display, but no ProMotion 120hz refresh. The lack of ProMotion is unfortunate but understandable. It requires another whole layer of display technology that is quite a bit more expensive. Having gotten used to it now I would say that on a larger screen like this it’s easily the best excuse for spending the extra $150-200 to bump up to the 11” Pro model. It’s just really damn nice. If you’ve never had one, you’ll be a lot less likely to miss this obviously.

But it also has an A14 Bionic chip where the iPad Pro 2020 models are still on the A12Z. Because that ‘Z’ is related to the fact that it has an extended number of graphics cores (8-core CPU/8-core GPU), the performance gap isn’t as big as you’d think. 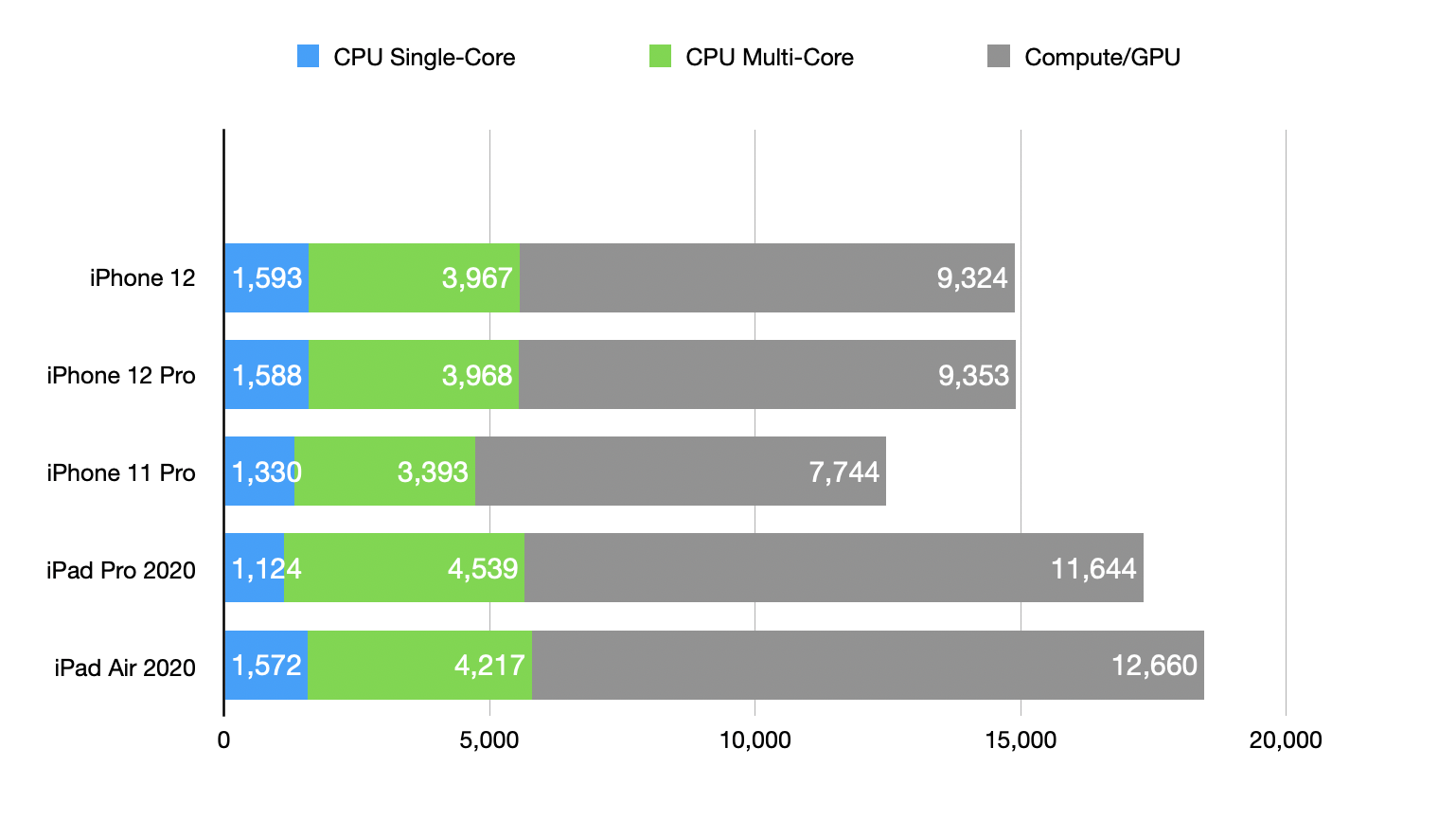 Though the iPad Air edges out the iPad Pro in single-core performance, the multi-core numbers are essentially on parity. This speaks to the iPad Pro being tuned to handle multiple processes in simultaneous threads for processing images and video. If you’re running Photoshop or Premiere Rush or LumaFusion on an iPad, you want the Pro. For most other uses, you’re gonna be just fine with the Air.

I do really wish that the Air started at 128GB instead of 64GB for the base $599 price. Apple has finally gotten the iPhone to a great place for minimum storage across the lineup, and I wish that the iPad Air matched that. If a ton of space is important to you, it’s important to note that you cannot get anything over 256GB in this unit, unlike the iPad Pro that is offered up to 1TB. 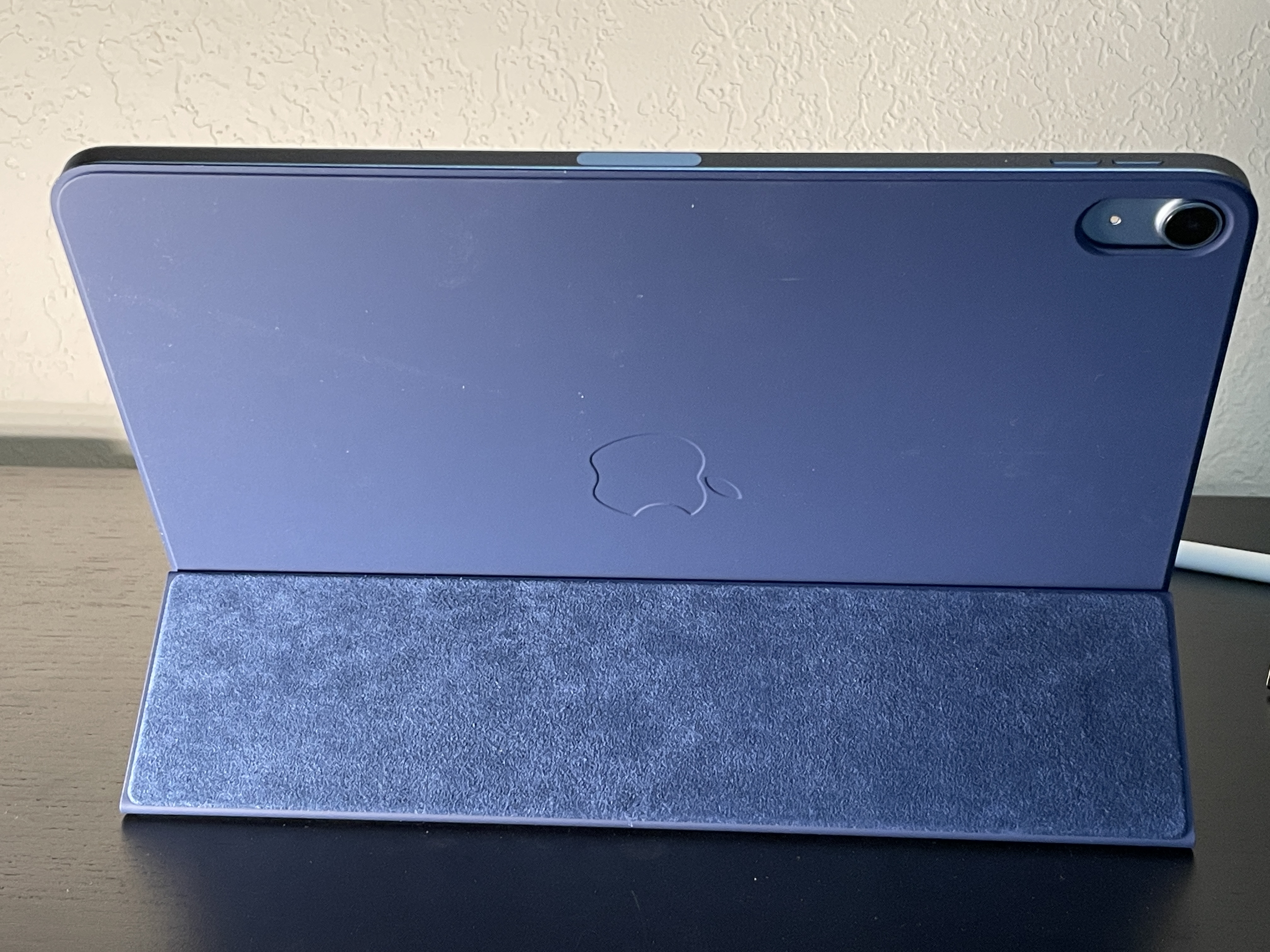 The two speaker system in the iPad Air is arranged in the much better horizontal array but it’s hal the amount that are in the iPad Pro and it shows. It’s a bit less loud overall but honestly the top volume is still way more than you need for typical iPad viewing distance.

Much of what I wrote about using Apple’s iPad Pro over the course of 10,000 miles of travel applies directly here. I still find it to be a great experience that, once you’ve adjusted for workflows, is just as powerful as any laptop. The additional features that have shipped in iOS 14 since that review have only made the iPad a better platform for legitimate work.

And now you get the Gen 2 pencil and the fantastic Magic Keyboard in an iPad outside of the Pro lineup and it honestly adds a ton of the utility.

Here’s my advice: Buy this if you want a portable iPad Pro to use alongside a MacBook or desktop computer for those times you don’t want to carry or can’t carry it. If you want an iPad Pro as your only computer, get the big iPad Pro but probably wait until they update that one in a few months.

Source: https://techcrunch.com/2020/10/21/review-ipad-air-smooth-criminal/
Proactive Computing found this story and shared it with you.
The Article Was Written/Published By: Matthew Panzarino