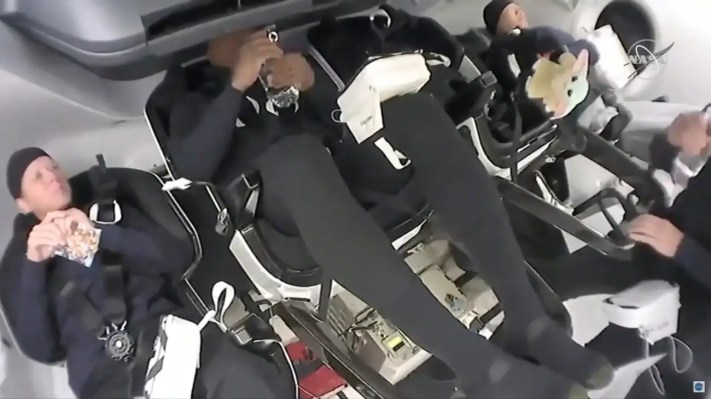 NASA added a surprise fifth passenger to the Crew-1 mission currently en route to the International Space Station – a plush The Child (aka Baby Yoda) from The Mandalorian. The doll is what’s known as the “zero-gravity indicator” – typically a soft, small object that is allowed to float free in the spacecraft cabin to provide a simple, but effective confirmation of when it passes into the phase of a spaceflight where Earth’s gravity no longer holds significant sway.

Crew-1’s other four passengers are all actual people – NASA astronauts Michael Hopkins, Victor Glover and Shannon Walker, along with JAXA astronaut Soichi Noguchi. They’re on their way to the ISS to staff it for the next half a year, on NASA’s first operational commercial crew mission, courtesy of partner SpaceX, which certified its Falcon 9 rocket and Crew Dragon spacecraft for human flight earlier this year.

Baby Yoda won hearts with its debut on Disney’s original streaming show The Mandalorian last year, and continues to woo audiences with this year’s second season. It earned its colloquial nickname because it’s a juvenile version of whatever the heck the original Yoda from the Star Wars saga is. In the new series, the youngster regularly earns reprimands from the series’ titular bounty hunter for messing around with his spacecraft controls.

Source: https://techcrunch.com/2020/11/16/nasa-sends-baby-yoda-to-space-aboard-spacex-dragon-alongside-astronauts/?utm_source=feedburner&utm_medium=feed&utm_campaign=Feed%3A+Techcrunch+%28TechCrunch%29
Proactive Computing found this story and shared it with you.
The Article Was Written/Published By: Darrell Etherington