Iconic Arecibo radio telescope to be dismantled after 57-year run 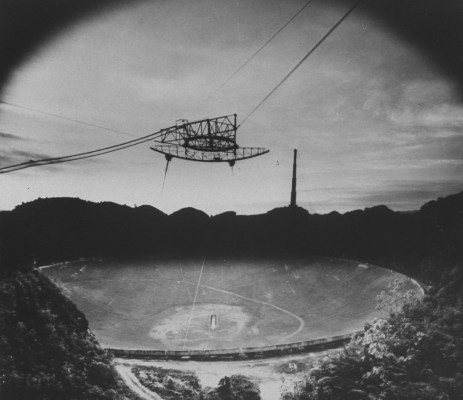 The famous Arecibo radio telescope in Puerto Rico, which has provided an invaluable service to scientists for 57 years as well as establishing itself in popular culture, will be dismantled after it incurred irreparable damage in recent months.

The enormous observatory was completed in 1963 and immediately established itself as a powerful tool for astronomers and atmospheric scientists around the world. The enormous instrument boasted a larger size and different architecture than anything before it, opening up new possibilities for monitoring the universe (and transmitting to it, not something every array can do).

Countless researchers and projects used Arecibo, which as a federally funded resource was at least partly dedicated to public proposals. Signals coming through Arecibo helped inform our understanding of stellar objects from Mercury to distant pulsars.

The Search for Extra-Terrestrial Intelligence famously used the telescope to transmit a message at high power towards a nearby star cluster structured so that its artificial nature would be unmistakable, at least to any form of life remotely like our own. The organization also scoured years of the observatory’s data for patterns that may indicate intelligent life doing the same thing in reverse.

Arecibo’s crowning moment in pop culture, however, is certainly its appearance in the 1995 James Bond film GoldenEye — and the wildly popular Nintendo 64 game based on it. Who could forget the climactic showdown between Bond and his antagonist, suspended hundreds of feet above the dish?

Sadly, Arecibo’s infrastructure has aged and the cost of replacing some parts seems to have been too great for its custodians to attempt. Though it has survived countless storms and earthquakes, the battering it has received in recent years seems was too much for some of its cables, two out of 12 of which broke in recent months, damaging the dish itself. It is suspected that the others may be in a poor state, and if so that vastly increases the danger and cost of repairs.

Consequently it was decided by the board at the University of Central Florida, which manages Arecibo on behalf of the National Science Foundations, that a controlled decommissioning was the only reasonable path forward.

“This decision was not an easy one to make,” the NSF’s Sean Jones told press at a briefing today. “We understand how much Arecibo means to the [scientific] community and to Puerto Rico.”

No specific plan has been arrived at yet for the dismantlement of the facility, but it would need to be done fairly soon to prevent more accidents from further reducing the safety of the site.

The loss of Arecibo is a grave one, and its capabilities are not replicated exactly by other observatories in the world, but it is no longer the largest or most sensitive radio telescope out there. Many successors have been built in the six decades since Arecibo was made operational; China just took the wraps of the Five-hundred-meter Aperture Spherical radio Telescope at the beginning of 2020, which promises to be an immensely important facility for astronomers worldwide.

While the famous telescope may soon be gone, Arecibo may remain as a scientific facility, suggested Arecibo’s program director at the NSF in remarks reported by Space.com. “We’re discussing the decommissioning of a structure made of steel and cables,” he said, “It’s the passion of the people that work at the observatory to continue to explore, to learn, that is the true heart and soul of Arecibo. It’s not the telescope that’s the heart and soul, it’s the people.”

Source: https://techcrunch.com/2020/11/19/iconic-arecibo-radio-telescope-to-be-dismantled-after-57-year-run/?utm_source=feedburner&utm_medium=feed&utm_campaign=Feed%3A+Techcrunch+%28TechCrunch%29
Proactive Computing found this story and shared it with you.
The Article Was Written/Published By: Devin Coldewey