Which Android Phones Have Wireless Charging? Every new iPhone has wireless charging, but it can be hard to tell which Android phones come with this handy feature. Brands such as Samsung, Google, and Sony generally support it on their flagship phones. OnePlus is the oddball out as it supports wireless charging on precisely one phone: the OnePlus 8 Pro (at least for now).

Wireless charging on Android has evolved quite a bit over the past decade. Earlier implementations were mostly proprietary to whatever manufacturer created it. Fortunately, modern Android handsets and even Apple iPhones have adopted the Qi standard for wireless charging. And in some fancier Android phones, you can enable “reverse wireless charging” to charge other devices such as smartwatches or earbuds.

What Is Wireless Charging? But how does the tech work? Well, wireless charging uses electromagnetic induction to charge your phone. In laymen’s terms, a coil, which is typically made out of silver-plated copper or aluminum, is present in both your phone and the wireless charging pad. When you align the two coils or “place the phone on the charger,” you create an electromagnetic field. Your phone generates a current from the field that’s then converted into direct current (DC) energy, which is pushed to your phone’s battery.

Aligning the coils is pretty straightforward. Generally speaking, you’ll want to align the middle of the back of your phone with the charging pad. Similar to wired charging, you’ll see your phone light up, indicating that charging has begun. Just note that you might not be able to wireless charge if you have a thicker heavy-duty case.

All of this is thanks to the Qi wireless charging standard. It’s maintained by the Wireless Power Consortium (WPC), which defines wireless charging as “energy that is transferred from one device to another without physically plugging in a cable.”

Flagship Samsung phones from 2019 or later support the company’s Fast Wireless Charging 2.0 standard. Galaxy S10 and Galaxy Note 10 owners should expect up to 12W of charging, while the Note 10+ and beyond will see up to 15W. Fortunately, 15W is “fast enough” to the point where speed doesn’t matter. If you want to talk about proprietary standards , look at the first-party wireless charger from OnePlus. The company’s Warp Charge 30 Wireless Charger will net you up to 30W of ridiculously fast wireless charging for your OnePlus 8 Pro. Unfortunately, you’ll be stuck with 5W of standard charging with any other phone.

While 30W charging is insanely fast, especially wirelessly, that does come with some compromises. The biggest being how loud the charger can get. Due to the sheer speed of the charger, it has built-in fans to dissipate heat. It also has an integrated charging cable, which means you’ll need to ditch the entire charger if the cable frays or breaks.

And to take it a step further, you’ll only get 30W charging with the OnePlus charger. No third-party wireless chargers have access to that kind of speed. But that also means unless you pony up the $70, you’ll be looking at 5W speeds on any other charger.

And then you have reverse wireless charging, which is available in most Samsung phones and the Google Pixel 5. The name says it all, it enables you to charge accessories such as true wireless earbuds, smartwatches, and other phones by placing them in the middle of the back of your phone. But don’t expect fast charging. You can technically charge another phone with the feature and it’s great in a pinch, but reverse wireless charging is limited to around 5W in terms of speed.

For the most part, glass backs are an easy indicator as to whether or not a phone supports wireless charging (though it’s not a guarantee). Some lower-end phones may opt to use plastic backs as a cost-saving measure. Unfortunately, wireless charging does not work through aluminum or other metals.

What Are the Downsides to Wireless Charging?

Wireless charging isn’t perfect. It has some issues, such as the inability to use and charge your phone simultaneously. Some chargers try to work around this by propping your phone upwards at an angle, but the problem remains. As soon as you pick up your phone, charging stops.

Alignment could be an issue as well. If you don’t align the coils, your phone simply won’t charge. You should also avoid wireless charging if you have a case that holds credit cards or RFID cards, as inductive charging can permanently damage the magnetic stripe on your cards.

And don’t forget that wireless charging is generally slower than just plugging in your phone. Most Android handsets come with fast chargers in the box. Charging speeds will vary between manufacturers but generally speaking, you’re looking at about 90 minutes to go from a dead battery to 100% with a 20W USB-C power adapter. In comparison, charging a phone from dead to 100% with a standard 5W wireless charger will take roughly 3 to 3.5 hours.

The Best Wireless Chargers for Your Android Phone

Now that you know what wireless charging is, it’s time to find the perfect charger for you. Whether you’re looking for a simple mat, a multi-device charger, or one that props your phone up, we’ve got your back. 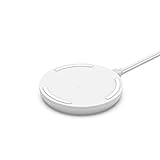 The Belkin Boost Wireless Charging Pad charges most phones quickly with speeds up to 15W.

For its price, the Anker PowerWave Pad is an excellent choice. It charges one device at a time and lacks a USB power adapter.

Need an all-in-one solution? Quickly charge your Qi-enabled phone, watch, and earbuds all at once.

Stand Your Phone Up

Portrait or landscape, charge your phone and prop it up! The Boost Up charges your phone at a respectable 10W. 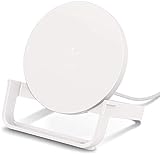 Source: https://www.reviewgeek.com/65288/which-android-phones-have-wireless-charging/
Proactive Computing found this story and shared it with you.
The Article Was Written/Published By: Peter Cao