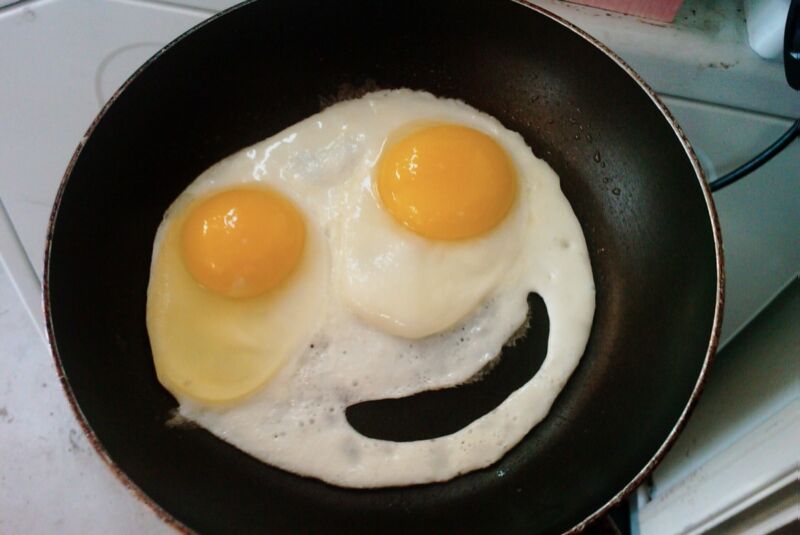 Enlarge / Foods will sometimes get stuck to a heated surface, even if oil or a nonstick frying pan is used. Scientists have concluded that convection may be to blame. (credit: Dan Tentler/via Getty Images)

Home cooks around the world have relied on nonstick cookware for decades for quick and easy cleanup after preparing meals. But sometimes food will get stuck to the center of nonstick pans anyway. A new paper published in the journal Physics of Fluids offers a likely explanation—food sticks because of the same underlying mechanism that gives rise to the coffee ring effect and so-called “wine tears.”

The first nonstick frying pans were made possible by the invention of Teflon in 1938 by a chemist named Roy Plunkett, who was researching possible new chlorofluorocarbon refrigerants as part of a joint venture with DuPont. In April of that year, Plunkett later recalled, his assistant selected one of the cylinders they were using to store tetrafluoroethylene gas (TFE) at dry-ice temperatures until the canisters were ready to be chlorinated for their experiments. When the assistant opened the valve, the gas did not flow under its own pressure from the container, as expected.

Puzzled, the researchers opened the container only to find the gas was gone. In its stead, they found a white powder. The TFE had polymerized into a waxy solid called polytetrafluoroethylene (PTFE), which proved to have some interesting properties: it was chemically inert and heat-resistant, and it had very low surface friction. Perhaps it wasn’t useful as a refrigerant, but it proved to be a terrific nonstick coating.

Source: https://arstechnica.com/?p=1739131
Proactive Computing found this story and shared it with you.
The Article Was Written/Published By: Jennifer Ouellette